In the heart of Venice where art, culture and devotion meet

The Scuola Grande di San Rocco is a lay confraternity founded in 1478. The popularity of the cult of St. Roch, whose remains had been in the possession of the brotherhood since 1485, contributed to the latter’s rapid expansion to the extent of it becoming the richest Scuola of the city.

At that point it was decided to build a new monumental headquarters and engage Tintoretto to decorate it with his most celebrated pictorial cycle, illustrating episodes from the New and Old Testaments. It is the only one of the historic Scuole Grandi to have survived the fall of the republic.

It is a unique site, where over 60 paintings are preserved in their original setting in a building that has hardly undergone any alteration since its construction.
The confraternity is still active today, carrying out its traditional charitable duties as well as looking after its extraordinary artistic patrimony.

COVID-19: Note for the Visitors from the Guardian Grando 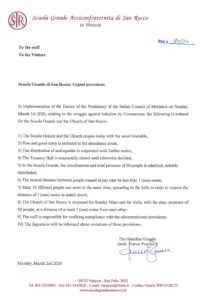 END_OF_DOCUMENT_TOKEN_TO_BE_REPLACED

The Scuola Grande will open to the public on Sunday, 7th June, with the Holy Mass at 11am.

After the Celebration visits will be free until 5pm